Home > About > Our Patron Saints 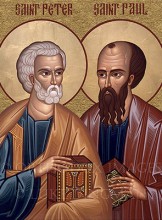 It was in the year 258 A.D. when the Christian Church decided to establish a feast day honoring Saints Peter and Paul as the two leading figures of apostolic times. In recognition of their tremendous contributions in the spreading of the Gospel and in the growth of the early Church, the Church named them as petvoverhovnie and pervoprestolinie Apostles, respectively, chief (of the Apostles) and occupying the first seats (among the Apostles).

We read about their devotion to Christ and their labors for the Christian faith in the Acts of the Apostles written by Saint Luke and, also, in the 21 epistles found in the Bible. Of the latter, fourteen were written by Saint Paul and two by Saint Peter. It is, indeed a fascinating and remarkable record of achievements.